If you thought Talent was an expensive commodity, try failure. But when you’ve got what it takes to express the gift of your talent, then all you need is a platform to showcase it. So the search for talent showcasing ends right here, as Max (one of the leading fashion brands), has decided to launch their new property called Max Emerging Star. It will serve as a vital platform for India’s aspiring Actors,  Dancers and Fashion enthusiasts, to nurture their dream of becoming the superstar that they aspire to be. The contest is primarily focused on analysing and grooming various aspects of one’s personality and qualities that are required to facilitate the ultimate dream.

The auditions for this contest will begin on the 4th of March in four cities across India, which include, Vadodara, Visakhapatnam, Bhubaneswar and Lucknow. It will be judged by an esteemed panel of well known names in the industry, such as legendary actor Anupam Kher, supermodel Marc Robinson & India’s dancing star Terence Lewis. The city winners will be announced and will undergo the main selection round in Mumbai on April 7th. 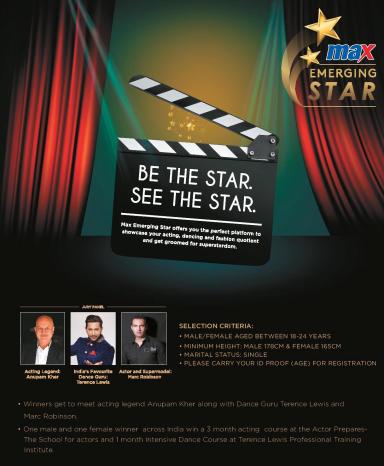 The schedule for Auditions to be held in the 4 different cities, is as follows:

Registrations in each of the above cities would be 11am to 1pm on the above mentioned dates.

The Eligibility Criteria to be a part of this exciting contest requires you to adhere to these factors:

The winners of each of the city finale will receive a cash prize of 40,000 Rs. and will get featured on the hoardings of the cities that they belong to. In addition to that, they will also get the opportunity to be groomed by Model Marc Robinson, and the national winners of the contest will recieve a 3 Month Acting Training Course at Anupam Kher’s Actor Prepares with a certification of approval, and professional dance training from Terrance Lewis.

This is certainly a one-in-a-million opportunity for all those who aspire and dream of making it on the big screen, but never had the chance or the direction to do so. So here’s a platform like Max Emerging Star, that will give hope and a name to the future of Indian Entertainment.